Tate Secrist is an agent with Farm Bureau Insurance & Financial Services and was looking for help with some large format design for their local home shows. After seeing a 10’x10′ banner that I had created for Creative Edge Design/Build at another home show, they asked me to design one for them as well. As an insurance agent, Tate was looking for a banner that would show some of the disastrous things that can happen with your home. Fires, flooding and storms were the things that they wanted the banner to depict, with the perfect, sunny alternative depicting what happens if you have great insurance through Farm Bureau. This was the final result. Photos are from the Shutterstock image libraries. The banner was printed at 10’x6′. 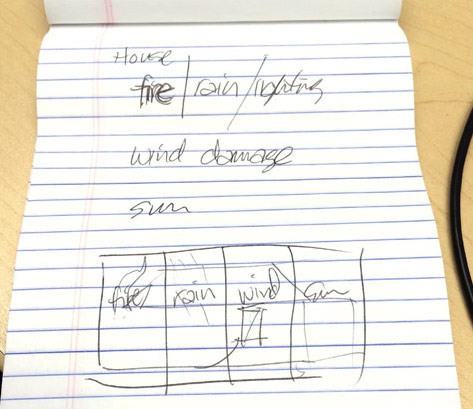 The process for the banner was a fairly quick one. Tate had been in conversations with me for a few weeks before the timing for the upcoming home show was looming upon us. Tate had expressed his thoughts on the parts that he wanted included in the design. His initial thoughts were to show one house that was being inflicted with four different kinds of scenarios: Fire, Rain, Wind and Sun. My initial sketch was to get the quick ideas on paper during our phone conversations. When the work officially started on the design side, I had less than 48 hours to compile all the artwork and complete the design to get it over to the printers so it would be ready in time for the Salt Lake Home Show. It was tight, but I was able to get it all ready in time. 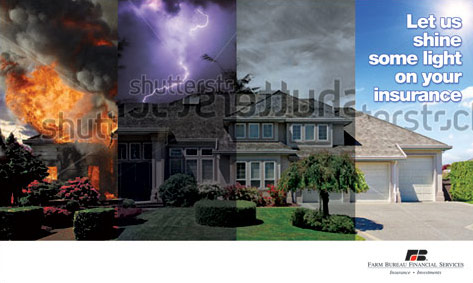 Most of my work is done directly in the computer. I find that my process moves much faster when I’m working on manipulating pieces that could be part of a final design.

For the artwork, I needed a set of photos that would work well together in the sectioned format that Tate was looking for. I found a good base photo of a house from Shutterstock and several complementary photos that would work well with the base. It was a challenge to find a set of photos where it could look like the main house was on fire, in a lightning storm, and in torrential rain and wind.

After the initial design was presented, it was decided that some bullet points would be beneficial. We decided to remove the Wind panel and added a broken water element into the piece in the form of a broken sprinkler. Originally, the broken sprinkler was in the center, but we decided to move that to the side, keeping the center section as perfect as possible and confining the disasters to the sides of the design. 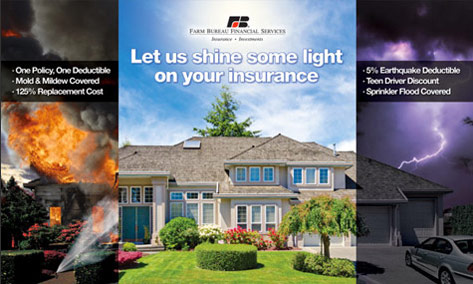 This is the final design for the 10′ x 6′ banner. It was designed at 50% the actual size based on requirements from the printer and was printed on high quality outdoor vinyl. 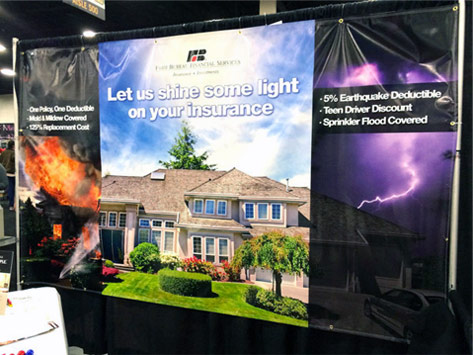 This is the banner hanging in the client’s booth at Salt Lake Home Show at South Towne Expo Center in Sandy, Utah.